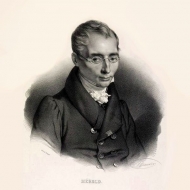 Louis-Ferdinand Hérold took his first music lessons with his father and entered the Paris Conservatoire in 1806, studying piano with Louis Adam, violin with Rodolphe Kreutzer and later composition with Étienne Méhul. Thanks to the unconditional  support of the last-named, he won a Premier Prix de Rome in 1812 and set out for the Villa Medici. In Italy his artistic aspirations underwent a radical change: he decided to switch from the piano virtuoso he certainly was (as witness his four concertos for the instrument and his innumerable sonatas, caprices and fantasias) and devote himself to composing for the stage. He premiered his first opera La gioventù di Enrico Quinto in Naples, then returned to Paris after a detour by way of Vienna. After several years spent as a repetiteur at the Théâtre Italien, the doors of the Opéra Comique finally opened to him. But the lukewarm reception of a number of pieces (Le Muletier, La Clochette, Le Lapin blanc and Les Troqueurs) meant he had to wait until the premiere of Marie to enjoy an unqualified success. At the same period, while working as singing coach at the Opéra, he composed a series of ballets which truly inaugurated the Romantic era in choreography (La Belle au bois dormant, La Somnambule, La Fille mal gardée). He achieved a resounding triumph in 1831 and 1832 with the successive premieres of Zampa ou La Fiancée de marbre and Le Pré aux clercs. He died of consumption early in 1833, at the age of forty-two.
(By a presentation by Alexandre Dratwicki)