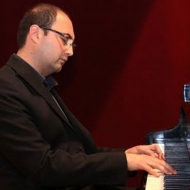 Kinderszenen is a work that radiates passion and poetry, formed by small miniatures. Only the one who loved and wore the clothes of humility could express, with so much poetry and effectiveness, the various moods of childhood. Its melodic line and its harmonic research, only seemingly simple, put a strain on the great performers and it is considered a test case for the remarkable musicality it requires. The Opus 15 is formed by thirteen miniatures, none of which occupies more than two pages of score, alternating simple formal patterns; almost all of them are in binary and ternary form, with a small rondo in Nr.11.

The Mo. Giuseppe Devastato is also an active composer, known for having written and performed numerous soundtracks for film productions. In 2010 he presented, as a guest of the Philharmonic of Iasi (Moldova), his symphonic poem "As my life." He currently lives in Madrid, he is of Master Class in Europe and in United States and also holds the post of Artistic Director at the Accademia Pianistica Scuola Napoletana "V. Vitale". In 2011 he was awarded the "Premio Internazionale Cartagine" for his artistic and human contribution, with its commitment to the diffusion of Italian culture, particularly Neapolitan, in the world.

You are here:Home»Highlights»'Kinderszenen' by Robert Schumann