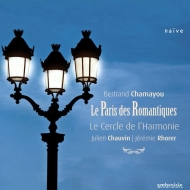 Composed in the late 1840s or early 1850s, when Napoléon-Henri Reber was professor of harmony at the Paris Conservatoire, the Symphony No.4 followed three others that had all been well received by both critics and audiences. The work is dedicated to the Société des Concerts du Conservatoire, the prestigious institution created by Habeneck in 1828 that had enabled Parisian audiences to hear the complete Beethoven symphonies, and wich accepted only the very finest works by contemporary French composers. The symphony was premièred by the Orchestra of the Société des Concerts du Conservatoire, under its conductor Narcisse Girard, on 22 February 1857. The use of a Classical orchestra (but with a larger brass section, four horns, instead of usual two), the clear structure of each movement, and the very natural and the same time elegant themes show how the legacy of Haydn's work had perfectly assimilated. The vocal quality and tipically French lyricism of the slow movement is combined with some personal ideas, tinged with Mendelssohn-like colourings here and there. Note, for example, the lightness of the scherzo, in which the melody, taken by the oboe, then by flute, unfolds over a bed of pizzicati from the strings, and the originality of a fugato that serves as the main theme of the finale.

All four of reber's symphonies were published in 1858. That same year, Saint-Saens transcribed the Fourth Symphony for piano four hands, a gesture reflecting both the quality of the work and the enthusiasm of audiences and composers of the time for the symphonic genre. Performed more rarely during Reber's lifetime than his other three symphonies, this one appears to have been presented only three times, at its première, then twice in 1863. This is the first revival since then.
(By a presentation by Muriel Boulan)

You are here:Home»Highlights»Le Paris des Romantiques