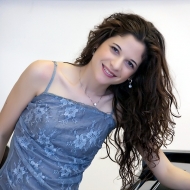 Irene Veneziano is a young pianist, fine, elegant and sensitive. Her curriculum is already so vast that it would be impossible to condense in a few lines. She plays regularly in Europe, Asia, Africa and America. She was awarded in more than thirty national and international piano competitions. She played with important musicians and conductors. She held several masterclasses and still teaches piano at the Conservatory 'A. Receipt' in Trapani. The recital, on air this evening, will offer you a varied repertoire that spans a period from the eighteenth century until the early years of the twentieth century. The concert was recorded in Turin on 22th April 2013 and is contained in a CD which you can request as a copy autographed by the website of Irene.

You are here:Home»Highlights»Recital by Irene Veneziano