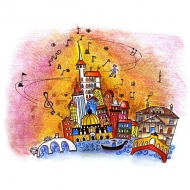 Note Future is a Concert Season which shows off the most distinguished musicians, gives the audience the chance to know young professional classical performers and offers the young players themselves the opportunity to show their own talent. The sixth edition of Note Future will take place in the theatre Dario Fo in Camponogara (VE). The concerts are patronized by Assessorato alla Cultura of Camponogara, Mr Massimiliano Mazzetto, in alliance with the School of Music 'Il Pentagramma' and its Director M° Maurizio Pettinà and under the Art Direction of M° Tania Salinaro. The Concert Season is structured in four musical evenings and wishes to show off only students, newgraduates and groups of musicians who have received prestigious awards at national and international level or those who are keeping up their studies at various Specialization Schools (Scuola di Musica di Fiesole, Accademia di Imola, Conservatori di Nizza e Lugano, Università di Vienna, Mozarteum di Salisburgo and Royal College of London). So, young promising and talented performers coming from all regions of Italy, making their debut as musicians, called to make people listen to their performances. The second evening will be dedicated to the finalists of the Piano Contest 'Premio Venezia' in collaboration with 'Amici della Fenice' and the fourth to the two soloists Erica Piccotti e Ghenadie Rotari accompanied by the Ensemble Note Future conducted by M° Giuliano Fontanella. Ms Alessandra Mura will be the presenter of all the musical evenings.

You are here:Home»BLOG»Events»Music»'Note Future' presents the most distinguished young musicians