The key of the night, expressed by the touch of Takahiro Yoshikawa 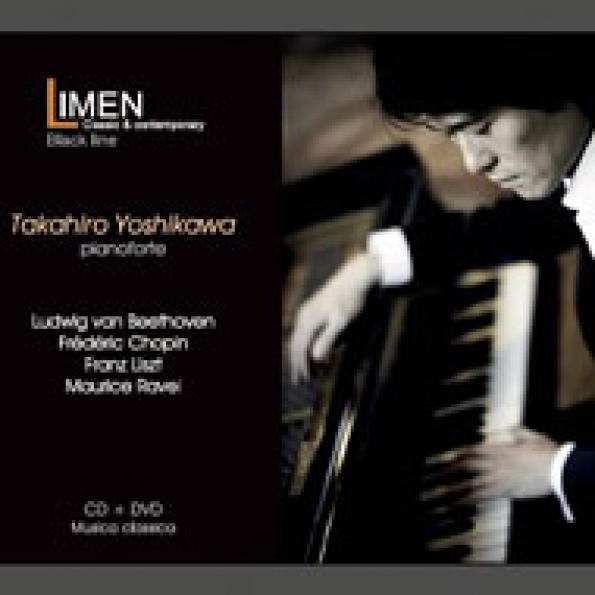 The theme is always the same: the night, with the same tonality and a single great actor: Takahiro Yoshikawa at the center of the last Limen production, with music by Beethoven, Chopin, Liszt and Ravel.

The "Sonata quasi una fantasia" in C sharp minor No.2 Op.27, composed in 1802 by Ludwig Van Beethoven (1770-1827), has been referred to, by generations of listeners, as the "Moonlight Sonata". A critic, in fact, called it a "night walk under the moonlight", and from that moment the suggestion gained a widespread acceptance. The first movement, though being the most "nightly" of the three, is even the most subversive against the tradition. It isn't a fast movement, as the common practice of music required, but an Adagio Sostenuto: in this way, Beethoven stated he didn't to take for granted the musical structures handed down so far, but he wanted to re-shape them in a different way, following always changing expression purposes.

With the two Nocturnes Op.27 of 1835 by Frédéric Chopin (1810-1849) the the night's topic becomes a full-fledged real genre. The first of the two pieces has has more dramatic tones, with a central throbbing section which moves to an explosive climax; the second one has a more contemplative nature, with a flourishing vocal style that melts, in the Coda, into a a real acoustic enchantment.

Sound enchantments are also in the eleventh transcendental etude, "Harmonies du soir", by Franz Liszt (1811-1886), composed in 1851, where the nightly nature is enhanced by other, especially spiritual, connotations.

In "Gaspard de la Nuit" the 1908 composition by Maurice Ravel (1875-1937), the night becomes the land of sorceries: a mermaid tries to seduce a mortal and then, rejected, retracts herself vexed; a corpse swinging at sunset on the scaffold and, in the third part, a deformed creature, Scarbo, who materializes generating fear.
(from a presentation by Alfonso Alberti)

Takahiro Yoshikawa was born in Nishinomiya in Japan. Since his childhood he showed a great artistic sensibility, that he followed, earning in the end a degree in Piano at the Tokio National University of Fine Arts and Music and a doctorate in Music Research. He continued his studies in Germany and Italy, attending the Accademia of Teatro alla Scala in Milan, performing as a soloist at the "Giuseppe Verdi" Conservatory in Milan and at the prestigious Teatro alla Scala, not to mention his many international performances and awards. Currently, he is engaged primarily in Italy and Japan, achieving a remarkable success for his intense and passionate performances.

More in this category: « Prev

You are here:Home»BLOG»CD & Liquid Music»Limen Music»The key of the night, expressed by the touch of Takahiro Yoshikawa