The Orpheus Kithara: a revival of the music at the era of Monteverdi 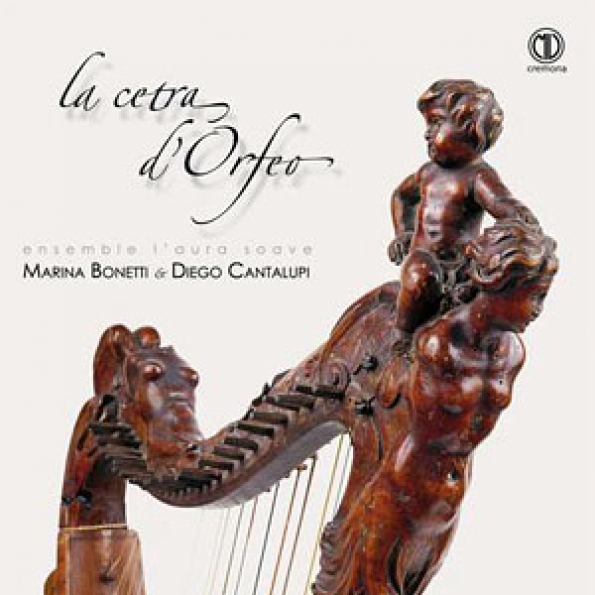 Marina Bonetti at the double harp and Diego Cantalupi at the chitarrone, both with original instruments, replay the music of the seventeenth century, interpreting compositions by Claudio Monteverdi and his contemporaries.

The musical 1600s represent a period of particular ferment: the birth of opera in music, the practice of continuo playing, solo singing with instrumental accompaniment. Musical settings change as well: they are no longer small chambers for musica riservata, but great rooms and theaters calling for powerful voices and instruments capable of filling them. The harp and the chitarrone are two striking examples of how ancient instruments, still nearly Renaissance models, become modernized, if not designed ex novo to adapt the power of their sound to these large spaces.
One should not be surprised that, from the moment of accompanied singing and consequently opera, they emerge as a "reconstruction" of the ancient Greek monody, in which a solo singer accompanied himself on the strings of the kithara. It is here that the role of plucked instruments takes the lead thanks to their extended, sonorous low register and to the possibility to play "piano and forte".

The repertoire of this CD draws on various sources. There are original pieces like "La Tità" for harp or theorbe, or pieces by Castaldi for theorbe and tiorbino (a small theorbe tuned an octave higher), in which the writing and timbre of the latter adapt themselves perfectly to the harp's modes. There are ostinato basses (Passacaglia, Ciaccona, Canario) or popular melodies (Antidotum tarantulae, La bella Pedrina, Suave melodia). Then there are the opera arias (Pur ti miro, from "The Incoronazione di Poppea" by Claudio Monteverdi). Finally, of course, there is soloistic music for chitarrone and continuo (Kapsberger) or music for solo harp ( Monteverdi and Lambardo). It seemed to us particularly representative to open the CD with the Toccata from "Orfeo" by Claudio Monteverdi: Orfeo, having descended into Hades to bring Euridice back to the kingdom of living, enchants Caronte with the sound of his cittern while the harp, defined here for the first time as "doppia", imitates the hopelessly lost sound.
(summary from a presentation by Diego Cantalupi)

Marina Bonetti began studying the arp with Mirella Vita and obtained her diploma from the "Luca Marenzio" Conservatory of Brescia, dedicating herself thereafter to the study of ancient music attending the Civica Scuola di Musica in Milan and the international courses in Urbino, turning her interests to the performance of continuo on the arp. Since 1996 she has taken part in important festivals in Europe and around the world. She has worked with leading musicians in the field of early music, including Marc Minkovski, Jordi Savall, Diego Fasolis, Christophe Rousset, Claudio Scimone and Estevan Velardi. She is currently teacher of the course on historical harps at the "Arrigo Pedrollo" Conservatory in Vicenza.

Diego Cantalupi has attended the lute classes at the early music section of the Civica Scuola di Musica in Milan and of the Parma Conservatory, graduating with honors. In 1996 he graduated with the highest possible marks; he received also his degree in Musicology cum laude at the Scuola di Paleografia e Filologia musicale of Cremona. He collaborates with many musicians and ensembles as a continuo player, taking part in important festivals and concert series, among them "Musica e Poesia a San Maurizio" in Milan, the Festival di Musica Antica in Cremona and the Salzburg Festival.
In 1996 he founded the Ensemble L'Aura Soave of which he is the director.

More in this category: « Prev

You are here:Home»BLOG»CD & Liquid Music»MV Cremona»The Orpheus Kithara: a revival of the music at the era of Monteverdi