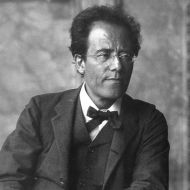 Considered the ultimate Gustav Mahler biographer, Henry-Louis de La Grange dedicates a new book to the composer who, in his life, was so much loved by the public and hated by the critics.

Gustav Mahler, the famous composer and playwrighter, who loved Giuseppe Verdi enough to remain literally enchanted by the sonority of Falstaff, was a real innovator of the music of his time. He was an appreciated performer and a discussed composer, certainly a provocateur. His musical language appeared as being overbearing and violent in the musical and social context of his time.

A long period was necessary before he became understood and appreciated by music experts of his time.

Certainly, his character didn't help, as he wasn't at all inclined to sociality: Mahler is described by many as being an excellent musician, but also as a neurotic and aggressive person towards his own musicians.

The story tells of his numerous arguments with the orchestrals who performed his symphonies, also culminated in the cancellation of concerts and major events. He had a double personality, which characterized him throughout his life: the sweetness that Gustav Mahler expressed in private life turned likewise into an aggressiveness in his professional life.

In his book, Henry-Louis de La Grange reveals Gustav Mahler in all its facets, narrating his personal life, his career as a composer, his inexhaustible creativity, his dramas as a man, his great love for his wife Alma Schindler, until his death in 1911.

Here is the life of Gustav Mahler, the man who "etched" with determination in the modern music, told with clarity and rigor by the highest of his living biographers, Henry-Louis de La Grange, in the book "Gustav Mahler. The life, the works", published by EDT

You are here:Home»BLOG»In bookshop»Biography»Gustav Mahler as told by Henry-Louis de La Grange