Beethoven's 'Pastoral Symphony' at the Theatre La Fenice in Venice 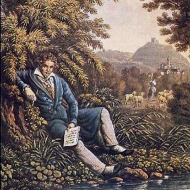 Michel Tabachnik conducts the Orchestra of the Theatre La Fenice, performing music by Bach, Beethoven and the orchestral Prelude from his opera "The légende de Haïsh".

The "Legende de Haïsh" is a kind of grand oratorio for six voices, double choir and orchestra, commissioned by Radio France to Michel Tabachnik to celebrate the bicentennial of the French Revolution. The Prélude à la Legende, overture to the opera, published as independent orchestral piece in 2011, is the page that will open the concert by the Orchestra of the Teatro La Fenice conducted by the composer as world premiere in Italy. The program will continue with the Chaconne in D minor BWV1004 from Partita No.2 by Johann Sebastian Bach, composed for solo violin and proposed here in the transcription for orchestra by Joachim Raff. The second part of the evening will be dedicated to the famous 'Pastoral Symphony' No.6 in F Major Op.68 composed by Ludwig Van Beethoven as a homage to his great love for nature.

Johann Sebastian Bach
Chaconne from Partita for solo violin No. 2 in D minor BWV1004
(transcription for orchestra by Joachim Raff)

You are here:Home»BLOG»Events»Music»Beethoven's 'Pastoral Symphony' at the Theatre La Fenice in Venice